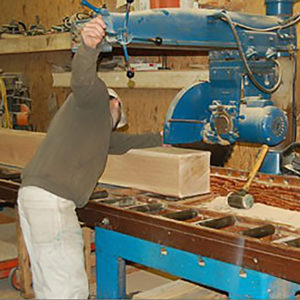 From 1981 to 1990, Ron Gabany and a 10-member crew worked in general construction building log cabins and residential and commercial buildings. Throughout this period, Ron learned about and continued to explore the craft of timber framing and the renowned men of the trade. In 1990, while building a timber frame home for his brother, Ron met the man who was to become his mentor, Bob Donahue of Atlantic, PA. Due to failing health, Bob had closed his building company, Atlantic Boatworks. From those ashes, Atlantic Timberframes was born out of the knowledge, tools and skill passed from Bob to Ron.

Atlantic Boatworks was established in the late 1970s by Bob and Tony Donahue of Pittsburgh. The Donahues were boat builders by trade and owned two custom-built sailboats. It was the 70's grass roots era of “Move to the Country and Build Us a Home” so they moved from their urban location to a much more rural setting 80 miles north in Atlantic. Now that they were in the country, the Donahues set out to build their dream home.

While doing research, they discovered the nearly lost craft of timber framing. Embracing a spirit of craftsmanship, they decided to build a timber frame home in the middle of their 40 acre farm. In the early 1980s, with a new timber frame standing and their two sailboats beside the shop, a tornado came down right on top of Bob and Tony. The four main rafters of the timber frame split down the center, taking the top half of the rafters with the panel roof and leaving the bottom half attached to the posts. The two sail boats were never seen again. Fortunately, the Donahues survived while sitting in the middle of their timber frame. They rebuilt their home, driving pins out of the rafter-to-post connections and installing new rafters and a roof. It was not long before Bob and Tony were "Home Sweet Home" again. Their story made the Pittsburgh news and was the catalyst for a period of booming growth within Atlantic Boatworks. The company became one of the founding companies of the Timber Frame Guild and was featured in "Fine Homes Living" as a timber frame company with some of the biggest tools in the industry.

Yes, Bob had some big tools for the times, one of them a timber joiner built for the Bessemer Railroad in the late 1800s, used to straighten big timbers used in the construction of railroad cars. This tool remains in use today at Atlantic’s wood shop and is a lasting testament to Pennsylvania’s machinist heritage. The joiner allows us to remove the bow out of milled timbers, just as you would for kitchen cabinets. This is the only big tool used by the crew, and we proudly complete the rest of the work by hand.

Atlantic Boatworks went through a big transition in the late 1980s due to Bob's failing health. After being dormant for a period of time, Bob passed the torch to Ron, who continues to carry on the tradition of timber craftsmanship with his son, Eric in the Atlantic Timberframes shop in Mercer.

We would love to talk with you about your timber frame project.

Schedule an Appointment
Scroll To Top